A prequel taking place decades before The Blackwell Legacy, Unbound is a much-needed but far-too-short glimpse into the life of Rosangela Blackwell’s spirit medium predecessor, Lauren Blackwell. It highlights a few of Lauren’s cases in the brief period of time she was working alongside her spirit guide, Joey Mallone. The game, besides adding context to both Joey’s and Rosa’s feelings towards Lauren, acts to introduce the “switch character” mechanic which appears in all sequels following it, and establishes the series antagonist known as “The Countess”. 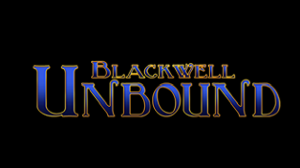 Unbound’s most apparent purpose, however, is to showcase the real differences between the main protagonists of Legacy and Unbound: the reclusive Rosa making an effort to go out into the world and live, and the firey and lively Lauren slowly becoming numb with each new ghost-related interaction. How the two handle their lives as spirit mediums coupled with their willingness to make real connections with living people is like night and day. While Rosa’s solitude stemming from a lack of family and general social anxiety is ended when she willingly reaches out to her neighbor (well, after messing with her dog), Lauren is seen dodging phone calls from her concerned and loving brother, the only living blood relative she has left. Rosa expresses a keen interest in getting to know her aunt and parents through Joey, while Lauren seems deadset on keeping everyone who is alive at an arm’s distance. Unlike the timid but adorably dorky Rosa, Lauren’s numbness in the face of her duty is only broken when she expresses anger (usually at Joey); truly, her overall attitude towards life is one of boredom and resignation. However nice it was to come face-to-face with the woman Joey loved, watching their interactions was a bit heartwrenching: fighting like a married couple, it’s very clear that, however Joey may’ve felt about Lauren, it wasn’t reciprocated or even acknowledged. Lauren seems so unaware and unconcerned with Joey’s feelings, her actions come off as selfish and cold. Unbound is not a happy story; it’s a peek at the flaws of a character some players may mistakingly interpret as “heroic”.

While a look into the relationship “Auntie Lauren” had with Joey was appreciated, the game was entirely too short; while I was able to finish Legacy in about 2 hours, I flew through Unbound in about 55 minutes (it was only slightly longer when listening to commentary at the same time). Playing through it, I couldn’t help but feel like Unbound should’ve been a part of a much longer game, and really, the commentary confirms that it was originally supposed to be a part of either Legacy or Legacy’s direct sequel, The Blackwell Convergence, as a sort-of flashback. Given the number of characters and locations you’re able to visit, you’d think Unbound would be a longer game, but you find yourself revisiting old locations repeatedly, and then once the cases linked to those areas are complete, those locales and the characters there become unavailable. There are even some areas you only ever have to visit once and for no more than a few minutes at a time, meaning the characters there exist for no other purpose than a 2-minute conversation. Coupled with throwaway characters and the ridiculously easy and few-in-number puzzles, it’s hammered home how unnecessary it was to make what should’ve been a long flashback in another game into its own entry in the series. Although I enjoyed the story, I felt cheated and was glad I’d bought the game on sale.

There is a slight improvement in audio and visual quality from the previous game, although it’s painfully apparent that Dave Gilbert is doing even more of his characters’ voices (you would’ve thought he’d hire someone else, but no….). The voice-over work is a step up from Legacy, and it’s lacking some of the first game’s odd sound effects, so that’s a plus. The music is very somber and paints Lauren’s gloomy mood quite well. The entire game, unlike Legacy, takes place at night, so the dim coloration of each scene plays into that dark theme, another contrast between the increasingly optimistic Rosa and her eternally pessimistic aunt.

The introduction of the “switch character” mechanic is an interesting little additon to the series. Each character has different abilities (although, Joey is limited to inspecting environment elements, and speaking to ghosts and Lauren), so the thought process for the solutions to the (annoyingly easy) puzzles is usually: “Can Lauren do the thing? No? Then, Joey can do the thing”. Really, Joey’s only purpose in the game is to talk sense into any ghosts he finds, spying on people without their knowledge and walking through walls. Oh, and one other task: distracting Lauren long enough to keep her from smoking, which is necessary to earn one of game’s achievements. Joey has come a long way from simply being a talking helium balloon tied to whomever he happens to be partnered with, but he’s still not doing enough to really justify the switch mechanic. If anything, the presence of the mechanic is meant to highlight how each character doesn’t necessarily need the other, and stresses the lack of cohesion the strained relationship has: each can function on their own without the other, and doesn’t seem to care what the other is doing while they’re working.

There really isn’t much to say about the NPCs in the game. Very few have any real personality, and the ones that do don’t seem to last. I get that Lauren and Joey are the focal point of the game, but making them the only memorable characters in the story cheapens the rest of the characters. One of the NPCs actually appears in the next game, Convergence, and he still doesn’t leave enough of an impression on me to really care about him (sad enough that he’s one of Gilbert’s voiced roles). I cared more about Nishanthi (Rosa’s neighbor) and her dog Moti than I did about 3/4 of the characters in this game, if that’s indicative of the poor writing. Unbound was a throwaway plot with cookie-cutter characters whose entire existence was meaningless beyond being stepping stones for establishing the purpose of a villain’s presence in the next game. You could honestly skip this game and it wouldn’t affect the later games at all. If you’re going to buy it, buy it cheap or in a bundle.

One thought on “Comfortably Numb: Blackwell Unbound (A Spoilerific Review)”

So, what are you looking for?

This is just a little writing blog run by someone named Lin (check the contact info). The content varies because I have a hard time getting my shit together. Sorry about the mess…

Hey, someone wrote something…